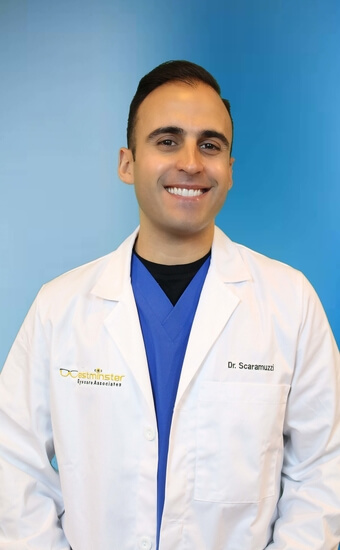 Dr. Scaramuzzi is a native Rhode Islander. He attended Rhode Island College where he received both a Baccalaureate of Arts degree in Biology and a Certificate of Graduate Studies in Biology. He attended Optometry school at the Inter American University of Puerto Rico School of Optometry where he graduated Magna Cum Laude in 2015 and received many awards including the prestigious Pat J. Cummings award for excellence and the Presidential Scholarship to name a few. He was the president of both the Beta Sigma Kappa honors society chapter and the Private Practice Club. It was during this time that Dr. Scaramuzzi interned at the number 1 eye hospital in America, Bascom Palmer Eye Institute in Miami, Florida.

Before joining Westminster Eyecare in August 2020, he practiced Optometry at Envisions Eyecare in Rhode Island since graduating Optometry school in 2015. Dr. Scaramuzzi enjoys playing billiards, cooking, rooting for all New England sports especially his beloved Patriots, and spending time with family, friends and his dog Yuki.